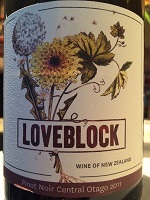 He said: Opened one hour before drinking. Clear, ruby red color with a light brick red rim. Mushroom, fresh cut hardwood and red fruit aromas (with hints of alcohol in the first few sips). Rich and robust cherry taste that had a long fruit and spicy herb finish that ended slightly bitter…the finish was the best part. A little rough round the edges, and a Pinot Noir that just squeaks into the “Not Bad” category. Good pairing with the pork, but not a Pinot Noir I would purchase again. At this price point we were disappointed.

She said: Barely translucent with legs that kept their distance from each other but moved quickly. The intense fruit aroma, touched with alcohol, quickly faded and all the alcohol disappeared and the fruitiness mellowed. The fruitiness was intense from the first sip and remained a dominant taste, but there was an initial harshness that slowly mellowed over time. Ray had opened the bottle one hour ahead, but it needed more time. The body was light and the tannins pleasant all the way through the long, lively finish.

The pork was a bit overcooked but still very tasty and the wine was a delicious accompaniment. Not bad with the salad too. I enjoyed the wine but think there are better “New World” Pinot Noirs available at the $30 price point.

Comments: Purchased in an Auckland, New Zealand wine shop and consumed in the Britannia Restaurant on board the Cunard Queen Mary 2.