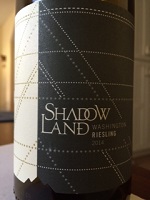 He said: Chilled before drinking. Clear light wheat straw color. Lots of over ripe Apple in the aroma. Strong ripe apple taste that’s just slightly tart and with some sweetness. The finish was long and ended with nice acidity and creamy mouth-feel. Good with the dinner, but just to sweet for my palate. So, although I wouldn’t but it again it’s a good buy if your looking for a grocery store semi-sweet Riesling.

She said: Light golden yellow, clear. A very mild aroma led to a mild flavor with sweetness dominating, so it was not my kind of wine. The body is medium, the mouth feel almost creamy, and the finish long, ending with a touch of tartness. The wine was served with an Indian chicken dinner flavored with apricot jam and garum masala. Most guests chose this wine initially to go with the dinner but preferred the tart Husch Gewurztraminer once they had tasted it. I did not drink the Riesling with dinner so can’t comment on its suitability but think I might have enjoyed it more with dinner than sipping. I’ll never know because I would not buy it again!!! 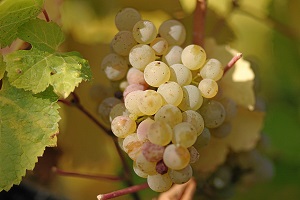 Comments: See also the Husch Gewurztraminer we also paired with this dinner.