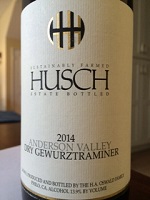 He said: Chilled before drinking. Light lemon yellow color. Fairly heavy rose and hints grapefruit aromas. The strong floral bouquet stays on through the rather tart grapefruit taste that continues through a medium-long finish. Although I wouldn’t say it was a dry Gewurztraminer, it wasn’t sweet either. Nice with the dinner, but not as good drinking alone after the meal. It was inexpensive but just OK and better than the traditional grocery store Gewurztraminer. My recommendation would be to spend more and get a better Gewurztraminer. It should be noted we also had Shadow Land Riesling with this dinner and I thought this Gewurztraminer was a far better pairing.

She said: Medium lemon yellow, clear. The aroma was filled with floral scents but with a strong tart grapefruit smell. OK, I’m not used to strong grapefruit in this wine but the aroma was certainly pleasing enough to look forward to the first taste. Wrong! The tartness of the grapefruit was strident and overwhelmed all the other flavors. The body was on the light side of medium and the finish long, but that was not a positive because of the tartness. The wine went well with the dinner but was not to my taste just sipping. It was rated well by Wine Enthusiast so I had high hopes but was disappointed. I would look for a Gewurztraminer with less tartness at this price before buying this again. 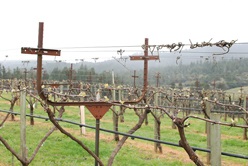 The bi-lateral trellis system at the Husch vineyard