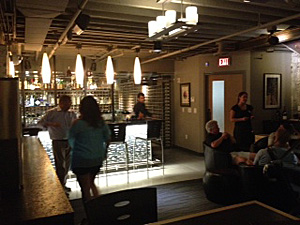 We frequently say “Once in a blue moon” we have a discovery that is truly special. Serendipity, yes that is what the Cellar Wine bar was when I found it in Lincoln, Nebraska. Recently I spent a week at a Sports Car Club of America event at the Lincoln Air Park. In our search of good restaurants we went to The Oven, a very excellent Indian restaurant in the downtown Haymarket area. It has noteworthy Indian food and we had a Gewurztraminer that went well with the spicy food. Then on our last night in Lincoln we went back to what we said was the best restaurant in town (it’s VERY different from the “Sports Bar” atmosphere of most other Haymarket restaurants) and discovered the Cellar Wine Bar in the basement. And, in a nutshell, it is one of the most outstanding wine bars I have ever found!!!

The decor is “elegant modern” with a bar, tables and relaxing soft chair groupings. The wine list has received Wine Spectator Magazine’s Best of Award of Excellence; but, the most unusual thing is the “automat” style wine dispensing machines. Here were a wide range of GREAT red and white wines that could be purchased in one, three and five ounce pours. This included wines up to $300/bottle. But the real fun was being able to taste so many outstanding wines without having to purchase a bottle…three ounces of Opus One was a little bit of heaven!!!

From talking to the restaurant waiter who pointed out the wine bar to us, it sounds like they have good wine pairing dinners too. Check out their mobile app for the schedule and menus.

Both the Oven Restaurant and the Cellar Wine Bar get the top TastedOnline.com recommendation. If your ever in Lincoln, Nebraska this is the place for outstanding wine and Indian food. In fact, it’s worth going out of your way for this food and wine. Just a couple of closing notes…the Mulligatawny soup is truly OUTSTANDING, the food prices were very reasonable, one night we were there a musician was playing an acoustic guitar that brought back memories of Ravi Shankar playing a sitar, the wine list was really, really good (and reasonably priced), and finally, they may also have the best selection of beer in town.