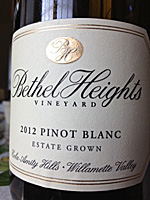 Recommendation: Recommended as a buy.

Pared With: Lentil soup flavored with cumin and lemon with garlic bread

He said: Served chilled. Clear, light straw with just a hint of green color. Light citrus and apple aromas. Very smooth ripe apple and pear taste with hints of tartness that goes into a long refreshing crisp, finish with great minerality. There is tasty flavor, good acidity and a wonderful finish. As it warmed up the finish really came alive. A delicious easy drinking wine with lots of flavor and complexity. Great wine and at $16.20 it’s recommended as a buy.

She said: Although the soup was complimented by the refreshing taste of the wine, the wine came into its own after dinner as we sipped it. The cumin and lemon in the soup dominated and covered the subtle flavors of the wine. Too bad because the wine has a delicious crisp green apple flavor, light body and long tasty finish. I would pair it with a different dinner to bring out its unique and delicious flavors. I highly recommend it at $16.00

Comments: On September 7, 2016 we had the 2015 vintage and found it quite different. Instead of being light and crisp it had a medium to heavy body and was almost creamy. The tastes were predominately sweet tropical fruit and about mid-palate the flavor turned quite tart and continued all the way through the finish and beyond. We would not call the 2015 vintage crisp or refreshing as we did for the 2012.