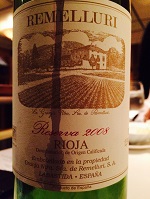 He said: Opened nine hours before drinking…and it was still getting better with each pour. Clear, purple with a light rim. Quite strong aromas of dark fruit, leather and smoke. SMOOTH, lively, intense fruit taste that was chewy; and ends with a dry, dusty finish that goes on and on. Probably the best Rioja we have ever had. Specular drinking alone before dinner and even better with the medium-rare beef. The medium-to-full body and robust silky dark fruit taste was beyond words. A MEMORABLE (in bold caps) Spanish Rioja from the Vila Viniteca Wine Shop in Barcelona. As we sipped the last morsels of this delicious wine we wanted to thank Russ Anderson at the Caviste Wine Shop for putting us onto the Vila Viniteca Wine shop…now were hoping he can get a direct line to these outstanding Spanish wines!!!!

She said: Our sommelier opened this nine hours before dinner because he knew how good it was going to be if opened early. This wine was much better than we expected. I was knocked over the intense bouquet but it was nothing compared to the taste. The mouth was filled with flavors and titrated by an array of pleasant delights. Dry, smooth, with delightful tannins and a long tasty finish this was a real winner. I am pushing Ray to move to Barcelona to be near the wine shop where we bought it. Lol.

Comments: Special Note: This wine was selected as one of the ten best value wines we reviewed in 2015, See The Best Value Wines of 2015