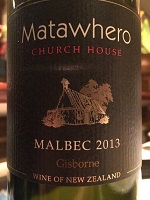 He said: Opened one hour before drinking. Clear, dark garnet color. Intense ripe juicy plum aroma with a very slight hint of alcohol (in the first pour). Smooth, mouth filling plum and blackberry taste with slightly grippy tannins that finishes dry, jammy and slightly mouth-puckering. A”new world” Malbec that really has punch. Drinking alone the powerful fruit taste is a bit overwhelming. With the pork it was OK, but the character of the wine didn’t change from the first sip (drinking without food) to the last (with the pork). A powerful, fruit filled, Malbec from the start to finish, but the fruitiness was simply to much for my palate, with or without food, and I wouldn’t buy it again.

She said: Almost opaque with lots of legs on the move. The aroma was undistinguished but it had a taste of very ripe plum that filled the mouth. Smooth, dry with medium body and very pleasant tannins. The wine was dominated by the fruitiness until the finish which was more about the tannins. Very tasty with the salad that had lots of garlic and slivers of parmesan cheese which was sharp and bitter. The pairing with the pork was not as good. The pork was delicious and the wine was good but they did not make each other better. This was one of the fruitiest wines I have ever had, which was its virtute and downfall…the fruitiness was not bad, but it overwhelmed the pork and would probably be the same for most other meats.

Comments: Purchased from an Auckland, New Zealand wine shop and consumed in the Britannia Restaurant on board the Cunard Queen Mary 2.