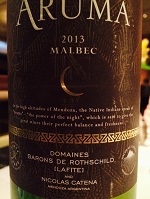 Purchased From: The Britannia Restaurant, on board the Queen Mary 2.

He said: Opened two hours before drinking. Clear, very dark garnet color. Wiffs of fruit aromas. Fairly strong black berry, smoke and a little damp earth in the taste that ends with a very spicy, dry, lingering finish. Not a wine that would show it face in the Caviste Wine Shop, but here it’s “not bad”. Good with the spices on the hens, but alone it’s a little rough around the edges.

She said: The fragrant red berry aroma has no trace of alcohol to betray its 14% alcohol level. The mouth was dominated more by the tannins than berry flavor but the medium body and dry finish were a plus. Nice sipping before dinner but delicious with the hen and the scrumptious sauce.