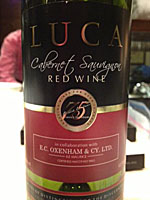 Purchased From: Liquor store and restaurants

He said: While on a recent trip to India we drank lots of Luca Cabernet and Merlot. They were all ruby red in color, with very very light barn-yard aromas and cherry taste that followed into a short finish. The wine was sort of a nondescript red wine; however it was not sweet (it’s best feature) and was fairly well balanced. Also in the initial taste through mid-palate there were hints of preservative or chemical tastes (there was a note on the bottle that said it contained “permitted preservatives”). We bought many bottles of this wine primarily because the imported wines from other countries all had a sweetness in the taste and were considerably more expensive.

She said: The first wine we bought in India was in New Deli, and was one of the most exciting ventures in our wine buying experience. When we asked our guide to take us to a wine store we never envisioned a hole in the wall of a basement filled with boxes of liquor, but that’s where we went. Only Ray could squeeze in among the boxes (piled to the ceiling) with the hawker to view the wines, so I waited outside in the underground catacomb while Ray bought two bottles of the only red wine they carried for a total of 900 rupees. Now that is potential for bargain wine.

Unfortunately this wine was drinkable but not a bargain or good value, which might be explained by the fact that alcohol is forbidden to Hindus and Moslems. As a result of the prohibition perhaps wine is not in high demand and therefore not developed in India to its greatest potential. Of course it might also be explained by the dubious credentials of the “wine merchant” involved, except it was the primary brand in India

Now for the wine tasting; very light bouquet (if any) and light cherry flavor. Our friends noticed tastes of salt (or maybe preservatives). Medium is the best word to describe body, dryness and tannins which adds up to boring. The finish was not memorable either. Sound like box wine? Not really because it did not have the sweetness that plagues so many of them. We did buy it many times while in India simply because all the restaurants had it and there was nothing better available.