Synopsis, Our Opinion: Probably the best New World Merlot we have ever had!!!

Paired With: Venison meatloaf with Madeira sauce, mashed potatoes and corn on the cob.

Opened one hour before drinking. Opaque, dark garnet color with a slightly lighter rim. Concentrated dark fruit with touches of woodiness, dark chocolate and sweet spice aromas. Velvety smooth, very rich and almost meaty mouthfeel, full body and a 150-grit texture. Opulent flavors of plum that would satiate any palate with lessor amounts of blackberry and cherry. Delicious fresh acidity, luscious round tannins and a finish that’s out of this world with luxurious flavors and a sensational palate pleasing aftertaste. WOW, WOW, WOW what an OUTSTANDING Merlot. It’s on par with the very best New World Merlot based wines and a contender for Bordeaux Merlot. After one sip Vicky remarked “This is one of those great wines that you just take little sips it’s so rich and flavorful”. We drink a lot of very good wines, but not many that are at the level of this Familia Deicas cru d’Exception. By the last pour we both said it was probably the best New World Merlot we have ever had!!! 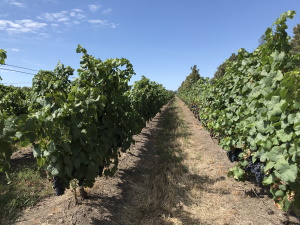 Comments: Learn more about Bodega Familia Deicas and their wines.

See our reviews of other Familia Deicas wines.

Imported by: Not applicable.