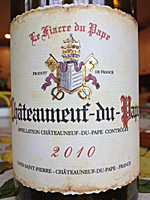 Purchased From: This bottle was a gift (It was purchased from Trader Joe’s; Winston-Salem, North Carolina.)

He said: Clear dark ruby color. Cherry with some medicinal aromas. Dark berry taste that finishes long, dry and full of tingling fruit. Lots of acidity (actually a little to much for me) and has pretty soft tannins. It’s not bad…but, it’s totally lacking any complexity and is a little lean. I wish it was a $10 bottle because at $20 it’s to expensive to recommend…hopefully Trader Joe’s will discount it at some point.

She said: From the first taste this wine was easy drinking and pleasant. The cherry flavored bouquet led to light fruity flavors, and light body and tannins. Pleasant dryness lasted into the long finish. The meat loaf was OK with the wine but roast lamb would be better. Nice wine but too expensive to recommend as a bargain wine.