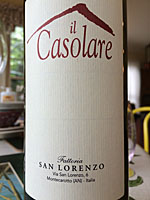 He said: Opened one-hour before drinking. Clear, dark garnet with a light rim. Barnyard aromas with just a tad of alcohol. Smooth, (almost sweet) juicy plum and blackberry taste that finishes with mouth-filling, dry, peppery and tart fruit flavors. Good with the dinner, but just OK drinking alone. An unusual wine that sort of grows on you. The initial sweet taste is a turn-off, but it has a GREAT bouquet and finish…and it’s very easy drinking. In the end I’d say it was a very nice Italian red wine that’s a GREAT value.

She said: Dark ruby red color, almost opaque, and with the most beautiful legs ever; lots of them, thin, even spaced, and eagerly clamoring downward. The label told us that the wine was 50% Sangiovese so we expected a Chianti sort of wine. WRONG! It bears little resemblance to Chianti but so what? It is still a delicious wine. The aroma was fairly strong and led to a well developed barnyard flavor with a fruity backdrop. The body is medium, the finish long and fruity with a bit of pepper at the very end…and the tannins were very pleasant. The smoothness of the wine was a big plus but the accompanied sweetness was not. The wine was very drinkable with the dinner but a Chianti would have been a more complementary section. The aroma, flavor, body, smoothness and tannins that emerged in the finish were all great assets that make the sweetness less of an issue. A true bargin wine!