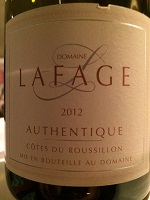 Recommendation: “Not Bad” but we’ll wait until we have another bottle before we do a recommendation..

Paired With: Beef ravioli in a mushroom cream sauce with died tomatoes.

He said: Opened one hour before drinking. Clear, dark purple color. Light red fruit and hints of damp earth and alcohol in the aromas. The fruity taste had LOTS of strong alcohol in the first pour, but by the last pour it was gone. The medium-long, dry, fruity finish also improved near the end of the meal. Quite good but didn’t do anything for the beef flavors in the ravioli. In the end it was very easy drinking, but fairly light bodied for this blend. I put this into the category of “Not Bad” and would like to have another bottle before making a recommendation.

She said: The aroma let us know immediately that it was high in alcohol. The fruity taste was dominated by the alcohol but the medium to light body and dryness, plus the griping tannins made this a wine worth drinking. It was NOT good with the dinner; however, and I would like to try it with red meat without the cream sauce.