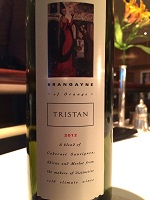 He said: Opened one hour before drinking. Very dark garnet color with a light ruby red rim. Wispy dark fruit aroma. Robust cherry taste and a long dry finish. Smooth with grippy tannins and a powerful fruity finish that had a hint of sourness at the very end. The wine didn’t sing with the rare-to-medium-rare beef and in the end it was just “not bad”. Maybe I expected to much from this blend that’s usually quite delicious with beef.

She said: A mild aroma of dusty fruit opened up to a red cherry flavor with medium body and soft tannins. The finish was long and retained the tannins and cherry flavor but had a touch of tartness or metallic taste at the end. The wine opened up a bit but never became succulent. The beef was a bit tasteless which lessened the disappointment with the wine. The lack of “umph” in the wine made it more agreeable with the salad than the beef. Not bad is about the best I can say for the wine. I would not buy it again but had no problem drinking it with the dinner or sipping it before or after the meal.

Comments: Purchased from a Sidney, Australia wine shop and consumed in the Britannia Restaurant on board the Cunard Queen Mary 2.