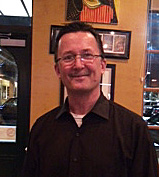 Have you ever thought of doing a wine tasting at a wine pairing dinner? Last evening we did it. We went with some wine tasting buddies for a wine pairing dinner at the Wine Merchant Gourmet/Vin205, a local wine store-restaurant, in Winston Salem, North Carolina where we had a delicious diner accompanied by some fantastic wines. After completing the dinner we wanted to buy some of the selections but couldn’t decide which to buy. No problem, our waiter, Carl, set us up with a blind tasting of our four favorites.

The wines were all from the Mollydooker Winery in Australia and included one white and five reds. Seared scallop with cauliflower puree, and crème onions was served with “The Violinist” (2012); blue cheese, crispy bacon and craisin bruschetta with mixed greens were served with “Blue Eyed Boy” (2011); Maple glazed pork tenderloin, rosemary wild mushroom ragout and mashed potatoes were served with “Two Left Feet” (2012) and “Enchanted Path” (2011); and Cabernet infused chocolate truffle was served with “Maitre ‘D” (2012). All four of us swooned over “The Violinist” so that was put right on the list but deciding between “Two Left Feet” ($24.99), “Blue Eyed Boy” ($32.95), “Carnival of Love” ($44.95) and “Enchanted Path” ($44.95) gave us pause for thought and prompted the requested for the blind tasting (for a very reasonable price). The unanimous first choice was “Carnival of Love” a dense, deep Shiraz with cherry, blueberry and clotted cream flavors plus a range of spices. Wine Spectator gave it 94 points while Wine Advocate gave it 93+ points. The least favorite (I described it as dull), was “Enchanted Path”, a Shiraz Cabernet blend which Wine Spectator gave a rating of 92 points and Wine Advocate 91 points. “Two Left Feet” ($21.25), a Shiraz, Merlot, and Cabernet Sauvignon blend, was picked as the second best by three of the four of us, but neither Wine Spectator nor Wine Advocate had rated it. So much for judging a wine by price or ratings! But it is interesting to note that the wine we all liked best came with the high price tag, as did the wine we like least; and the cheapest wine was liked second best.

When we arrived home we had some very good new wines to add to the wine cellar (we bought both “The Violinist” and “Carnival of Love”) and fond memories of a very good dinner with fine wines, exceptional company, and a restaurant that accommodated our tasting quirks. What a great way to spend a Friday evening! We look forward to the next one.