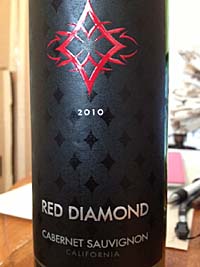 He said: At best this is just an okay Cabernet. Dark ruby red color. Very light berry bouquet. Very strong tannins with a sweetness that continues into the finish. There was were not any wood flavors and it did not pair well with bitter dark chocolate either. At $6.00 it’s cheap but only a fair Cabernet.

She said: We chose this wine because we wanted a red that could have sweetness and figured an inexpensive Cabernet might fill the bill. The wine had a slight fruity bouquet, medium body, little flavor and considerable harshness in spite of its sweetness.

Comments: Red Diamond Merlot was MUCH better and at the same price.