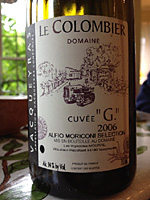 He said: Okay Rhone. Dark red color. Very nice layered bouquet, medium-body with a slightly sharp (or tart) raspberry flavor and a short earthy finish. Both the berry flavor and the dry earthy finish disappeared quickly and the bouquet was its best feature. It did improve as we drank it so it would have benefited from decanting. It really wasn’t bad; but at $19.99 we have had better Rhone wines.

She said: The cork was broken so we feared the worst. We were delighted to find that it was delicious with lots of flavor but with a degree of harshness. As we finished dinner and moved on to the chocolate the harshness declined and the bouquet became deep and flavorful, followed by a medium-bodied flavor and ending in a dry finish.